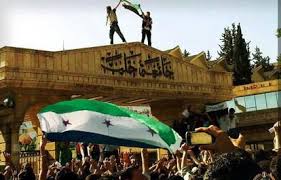 a presentation to explain the initiative, and to invite all interested into participate and support with collecting signatures.

to support the the students and the teaching staff of the Free
University of Aleppo. Syria, in their struggle for an independent
education program, and in their rejection of the decision by the
“Government of Salvation”, i.e their refusal to belong to any political body that promotes terrorism or dictatorship, in this case, the al Assad Regime and the “Government of Salvation” which is dominated by and is an ally of the
Hayat_Tahrir_al-Sham which is count as terrorists group.

the presentation, is going to be around 20 min,
an introductions to the situation and the problem of the independent of the editions institutions in Syria and how a Independent education reflect on democratic society.

then a record Skype interview with Dr. Jawad Abou Hatab and if possible with more teaching staff of the University which both are critical the moment because the Nord of Syria is currently under heavy attack of the the Assads and Russian Milliary. We will also show a short video from the World press( abc, Aljazeera)

Since May 2016 he has served as Prime Minister the Syrian Interim Government (though he resigned as prime minister on 10 March 2019.

Hatab established since 2011 several Field Hospital in Jordan, Turkey and in Syria till now where he work.
CURRENTLY he established with other Member the educational system in the University of Frei Aleppo, where he teaches in the Frei University of Aleppo.